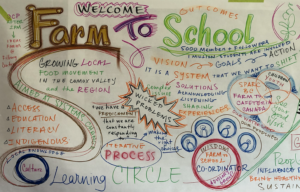 Enhancing and transforming the current systems that influence how students eat and learn about food was the focus of the first Comox Valley Farm to School Learning Circle held on February 19.

Led by Jenn Meilleur, Comox Valley Coordinator Farm to School, and co-facilitated by Maurita Prato, Executive Director of Lush Valley, the day-long event brought together key school and community stakeholders who have been instrumental in growing the healthy food program in some of our District schools.

Meilleur, with the aid of an advisory committee, is charged with leading a process to build and strengthen the community of practice around bringing healthy, local and sustainable food and food education in schools.

Comox Valley was chosen as one of the regions in the province to have a coordinator because of the existing solid base of interest and activity in the school district with partnering organizations thus far. Joanne Bays, F2CC National Director dropped in on the Learning Circle to learn about what makes the movement in the Valley so vibrant, a movement she helped spark initially and has inspired thousands nation-wide to follow. Bays shared with the Learning Circle participants that the work currently in progress and already accomplished throughout the District is on the radar provincially, nationally and, to some extent, internationally.

Farm to School is a relatively new approach in Canada, according to F2CC. The literature on the topic is limited in comparison to the United States. Farm to School efforts in Canada have focused mainly on developing program spearheaded by individuals and community partners with a desire to provide more healthy, sustainable foods in public institutions.

Here in the school system, school salad bars and food programs such as Breakfast Clubs have been the primary focus, some schools working in close collaboration with others while other initiatives are run independently. Since 2012, when the first salad bar program was introduced at Huband Park Elementary, an increasing amount of work around teaching students about sustainable food sources, better nutrition and the complex relationship food have with our climate, our culture, the community, and the economy has unfolded with more opportunity to expand.

The goal of the first of three Learning Circles was to create one succinct vision and mission for all schools in line with the philosophy of F2CC and to develop a framework that will help the school Farm to School program thrive and survives now and well into the future. Participants were guided through a dialogue about what that framework could look like and then mapped out the primary focus for a local food program in the District.

As Bays cautioned, there is no universal food program. It isn’t a cookie-cutter solution. And, as participants soon discovered, there were many shared values around local sustainable procurement through community partnerships with the many farms this region enjoys. Food security and student involvement also played a prominent role during the first day of collaborative dialogue.

“We covered a lot of ground and I think that we have a really inspiring vision and some good momentum building in a few key areas. I am proud of what this group created and very excited about our next steps,” shared Meilleur. “We do this work with a focus on sustainability, social justice and collective action toward Reconciliation. We are part of the global climate action movement.”

In the coming weeks, Meilleur will be creating a report about the day to share with participants and those interested in being involved and supporting the Comox Valley Farm to School movement. She will also begin convening the action teams in the four priority areas identified by the Learning Circle. Those four areas of interest are to create a centralized school and food coordinator position and hub, food programs at every school, food literacy curriculum development, and community supports for school food.

The efforts of the Learning Circle and contributions of the participants was captured by Jill Alison Banting, a local graphic facilitator who brought beauty and creativity into the process.

While there is still some wordsmithing to more accurately capture the intention of the Learning Circle, the draft vision statement created at the end of the day-long session is,

“Food is medicine. We celebrate the intimate connection between children, healthy food, community, culture, and planet. Local food is at the center of our schools, integrated into all aspects of learning – in schoolyards, classrooms, farms, and Indigenous community.”

Valley residents interested in getting involved may contact Jenn Meilleur at f2scomoxvalley@gmail.com. She is particularly interested in more representation from youth, farmers, and other food providers and community partners.

Click here for more information about Farm to Cafeteria Canada.

You have successfully subscribed!

(You can unsubscribe at any time.)